Have you received many gifts like cribs and blankets for your baby shower? Are you looking forward to using that on your child? If so, then you should read this article. We have included complete instructions on how and when to use a baby blanket for your child.

When can the baby sleep with blankets?

The first question is, when can the baby sleep with blankets? According to the American Academy of Pediatrics, an infant younger than a year old should not sleep with a blanket. SIDS most usually kills infants between the ages of birth and six months6. It can also happen to newborns as young as 12 months. Remember that the blanket shouldn’t be used for your baby till they are 12 months old.

Are blankets safe for babies to sleep with?

The American Academy of Pediatrics advises against placing blankets on babies under the age of one year.

Any time throughout the infant’s first year of life, placing a blanket in their sleeping area too early raises the risk of unintentional suffocation. In addition, any soft objects in the cot, such as a blanket, mattress, bumper, or stuffed animal, might increase the likelihood that your baby will suffer from sudden infant death syndrome (SIDS), the leading cause of newborn demise.

Your baby sleeping with a blanket at an early age carries various concerns. These are a few of the most typical.

The scariest aspect of SIDS is its unknown etiology; instead, several relationships between behaviors and negative outcomes have been found. Therefore, the AAP advises against engaging in any actions known to increase the risk of SIDS, such as putting a blanket in the cot too soon.

Infants who pass away suddenly and unexpectedly from either natural or artificial causes are known as SUIDs. SIDS may bring on SUID. It means the reason for death is unknown. 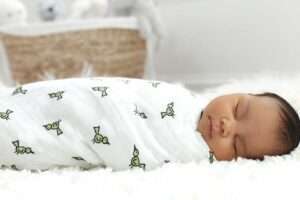 Swaddling is the act of covering a baby tightly in a blanket for warmth and safety, exposing only the head. When appropriate, such as when the baby hasn’t tried to roll over, swaddling can be safer than covering your child with a blanket. This method can encourage sound sleep and let the baby feel reassured without actual parental contact. Rarely do newborns who are swaddled die suddenly. Babies whose parents swaddle should always sleep on their backs. Parents should stop using a swaddle once the baby rolls over, usually around two months, due to the increased danger of asphyxia posed by a newborn sleeping on their tummy. Parents should be mindful to stop swaddling their children as soon as they roll over in any direction, as some babies may do so before the 2-month interval.

When can I introduce a blanket?

According to AAP, there is no set age at which using a blanket, quilt, or comforter is completely safe. However, most medical professionals believe that healthy infants can safely use soft bedding in their cribs after 12 months, ideally by the time they are 18 months or older.

Therefore, please wait until your child is 18 months old before covering her with a blanket at night because she might still get tangled in it when she is younger. However, a light blanket and a small, unique lovey can be utilized beyond 18 months and may play a significant role in the tuck-in ritual.

Even if you intend to put your infant on top of the blanket rather than underneath it, soft bedding should still be avoided because it could become rolled up around her while she moves while sleeping.

How Can I Keep My Baby Warm If I Don’t use a Blanket?

Without using blankets, parents may maintain the appropriate temperature for children sleeping in various ways.

Dress Your Baby in Layers

Try layering your baby’s clothes instead of giving them a blanket for extra warmth throughout the night. Never add more than one layer to your baby’s sleepwear.

Your baby’s room temperature should be between 68 and 72 degrees Fahrenheit. Babies can sleep all night at the right temperature. Furthermore, excessive heat may raise the risk of SIDS, making a suitable room temperature even more crucial.

Put your child in a sleep sack or swaddle.

On chilly evenings, swaddling your baby can increase their warmth and make them feel safer. Wearable blankets or sleep sacks provide similar warmth and safety but zip up. To prevent it from coming off or having an extra fabric that could pose a choking hazard, it’s critical to ensure that your baby’s sleep sack is the proper size. A swaddle or sleep sack can be used as one layer of clothing if you are layering. Once the baby starts rolling in any direction, remember to stop swaddling to reduce the chance of suffocation.

In addition to keeping the crib free of objects, bear the following in mind to create a secure sleeping space for your growing child:

While keeping in mind developmental milestones, experts advise waiting until after your child turns one before asking your pediatrician to determine whether they are ready for a big-kid blanket. The life of your child depends on it, after all.

When Should Babies Start Wearing Shoes?

How to Fold a Stroller?- Step by Step Guide

13 Best Sippy Cups For Babies To Drink Without Spilling