When we cook something that releases a lot of smoke, oil fumes, moisture, and aromas. These oil particles will settle on electronics, cabinets, walls, ceilings, and grease coated with a thin film. It not only makes your kitchen dirty but also affects your health too.

One study found that cooking smoke can cause indoor air pollution. Thus it may lead to respiratory issues. So it is essential to have a good air circulation in your kitchen. The stale air should be replaced by fresh air from outside so that the pervasive odor of cooking does not always linger around the house.

The best solution to ventilate your kitchen is kitchen chimneys and exhaust fans. These two are extraordinary at eliminating indoor smoke. Both are different in design, cost, but the concept is the same. Let’s explore the functions, merits, and demerits of each. Both exhaust fan and kitchen chimney are widely used to clean air in the kitchen.

What is an Exhaust Fan? 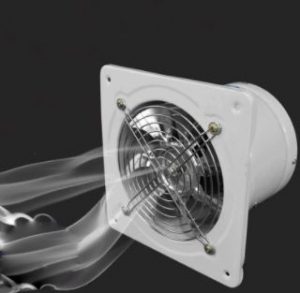 An exhaust fan removes smoke and odors from the kitchen, but not oil and grease particles. It allows fresh air from outside to enter your kitchen thus making it odorless and smoke free. The amount of air that can be converted by an exhaust fan per minute is measured in cubic feet per minute (CFM). The rate will differ depending on the size of your kitchen.

What Purpose Does an Exhaust Fan Serve in a Kitchen?

How Does an Exhaust Work?

This fan comes with three main parts, a frame, blade system, and an electric motor. The motor is attached to the blades which have three or more leaves. The suction power of the product increases when the number of blades increases. The electric motor and the blade system are mounted on the frame for maximum strength.

Merits of Having an Exhaust Fan

Demerits of Having an Exhaust Fan

Major Things that You Should Know About an Exhaust Fan

Compared to other types of fans available on the market, an exhaust fan makes relatively loud noises. The number of blades attached to this fan and the speed of rotation can cause a more audible sound than other devices. Another thing you need to know is that an exhaust fan should be installed near the side ceiling so that one side of the fan faces the outside of the wall.

What is a Kitchen Chimney? 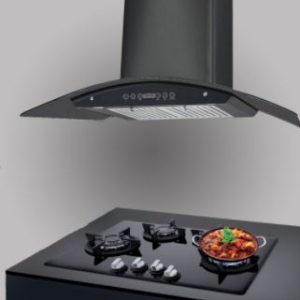 In the earlier stage, the only electrical device designed to keep fresh air in the kitchen was an exhaust fan. However, over time, the design and layout of the kitchen has been changed and so the exhaust fan also becomes old and it disrupts the beauty of the kitchen.

After that kitchen chimney was invented, it was designed to fit on the wall. It absorbs all the smoke and other oil particles that are released while cooking.

Depending on the installation, the kitchen chimney can be classified into two types – ducted and ductless.  A ducted chimney’s performance is equal to 15 exhaust fans, whereas a ductless chimney performs similarly to eight exhaust fans.

The kitchen chimney is attached with potent suction motors and filters that are capable of absorbing all the smoke, oil, and grease particles coming out of the kitchen. It purifies and re-releases polluted air.  When cooking spicy food, the oil particles that are produced will settle on the shelves or cabinets of the kitchen.

After some days, your kitchen will become dirty, and the color will start to fade. So having a kitchen chimney will not allow those particles to enter into your house.

Our blog about the Best Kitchen Chimneys in India 2021 has the top brands. Don’t forget to check out!

How Does a Kitchen Chimney Work?

A kitchen chimney is very easy to work with, and an electric motor attached to the product absorbs smoke, steam, and oil droplets produced while cooking and is pushed out by the chimney. The grease in the air is absorbed and filtered in the chimney. You should clean the filter regularly to avoid blockage and loss of cleaning capacity.

Merits of Having Kitchen Chimneys

Demerits of Having Kitchen Chimneys

Which One is Better?

Aside from the price, it is clear that a kitchen chimney is more effective when compared to an exhaust fan. One decreases your cleaning effort, and the other is cheaper and uses less electricity.

However, the chimney is a bit pricey, but it decreases the effort to clean the kitchen and keeps the kitchen free from smoke and grease.

Both the devices have some advantages and disadvantages. In conclusion, a kitchen chimney is the tool you need to target.

Hope so you’ve got a clear idea about the difference between an exhaust fan and a kitchen chimney.

If you have any queries, you can feel free to share them with us in the comment box below. We are very glad to answer your questions. Thank you for spending your time reading this guide.

What are the Different Types of Microwave Oven: Explained!